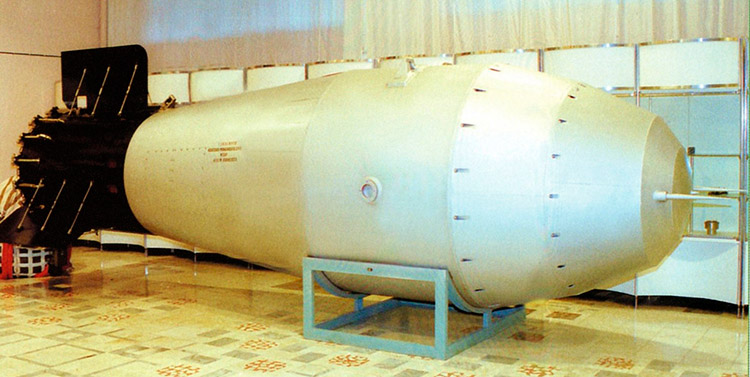 So on the 30th of October, an explosion equal to 57 000 000 tons of TNT quaked the Earth, that created a mushroom like cloud 60 km long. Such a blow is so powerful, that it could have made third degree burns to people located 100 km away from the center of the explosion. This is a great distance…

The Tsar Bomb was a hydrogen bomb, also called thermonuclear bomb. Such devices are blown by a smaller nuclear explosion.

The 10 Most Powerfull Atomic Bomb Explosions

Here is a short video, in which you can watch the 10 biggest nuclear explosions. These are the bombs with the names:

This thermonuclear bomb had the power of 57 000 000 tons of TNT. It was blown up on the 30th of October, 1961 by the Russians. This is the biggest nuclear explosion on Earth so far.

This bomb was dropped on the 9th of August, 1945 in Nagasaki killing hundrets of thousands of people. The bom had the might of 21 000 tons of TNT:

One of the bombs dropped in Hiroshima killing thousand of people, 18 000 tons of TNT

How Many Are the Nuclear Bombs in the World

As you can see, nuclear power could be really destructive and dangerous for humanity. In 2010 there were more than 20 000 nuclear bombs existing in different countries in the world. You have just seen what these bomb can do, I hope you realize the risk they are for you, your family and kids and for all the people in the entire world. This amount of nuclear weapon can destroy our planet multiple times. The good news is that their number has been declining constantly for the last years. I think everybody should support the decommission of the nuclear weapons around the world. The would not help anyone and the can destroy humanity. We don’t want this to happen…