The sarcophagus is a complex engineering system. It consists of many rooms, of walls and of overlaps. It is an interesting nuance: Chernobyl concrete sarcophagus is the fraction of the fourth power unit. The reactor was not completely collapsed. It has received considerable damage of the walls and the roof: support beams of sarcophagus partly lie on the walls of the former nuclear power plant.

The installation of the sarcophagus (the official name is the facility “Shelter”) lasted 206 days. It was completed on November 30, 1986. The government has mobilized dozens of thousands of men for creating the Chernobyl sarcophagus construction. The teams worked around the clock. A number of people reached 10 thousand in one change.

The liquidators created boundary walls that separated the fourth unit from the third at initial construction. Then, the men built the ferroconcrete wall on the perimeter of the destroyed unit №4. The wall thickness of six meters on the north side, eight meters with the south and west. 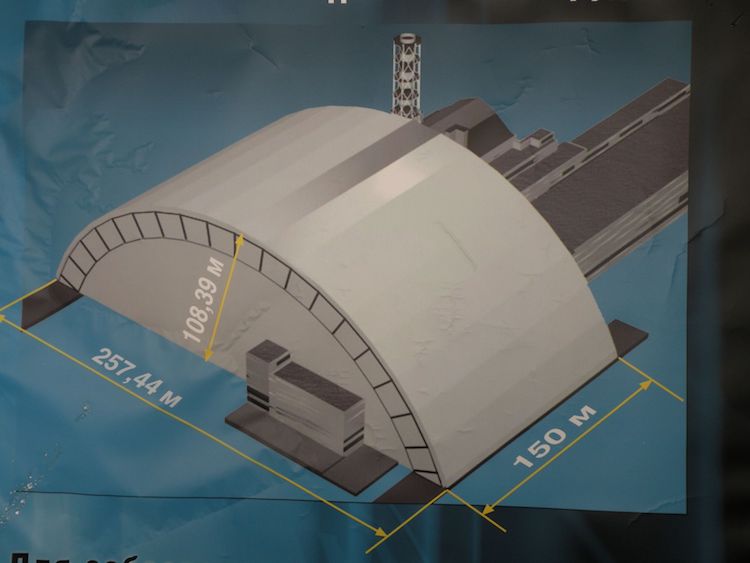 Inside projections were interred, filled with concrete, the damaged metal constructions and the containers with the radioactive refuse. The top covering, over the destroyed reactor, was made of transverse metal beams.

Then, the builders laid metal pipes (27 pieces with diameter 1.2 m) on the beam with help of the building cranes. The length of each pipe is 34.5 meters. Above them, the erectors installed the roof that was made from profiled sheeting.

What is inside Chernobyl sarcophagus?

Under the sarcophagus, there are plenty of premises and rooms. They can be divided into three groups: 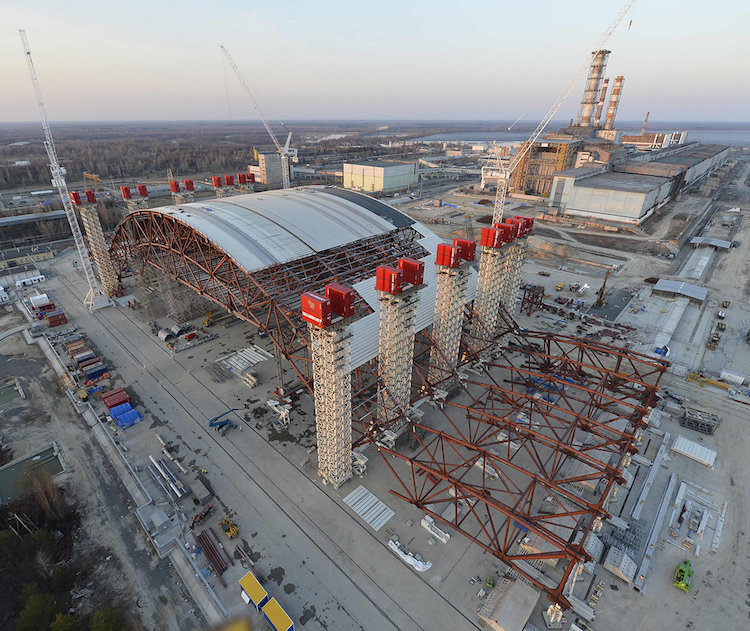 The new rooms are separated from the destroyed reactor hall by thick concrete walls, through which the radiation have no possibility to penetrate. There are two main reasons for the making of these premises:

The second class, it is the former premises of the fourth power unit. In some of them, the researchers managed to get access only in the early nineties. It is possible to describe these halls like that: the traces of soot on the walls, a thick layer of dust on all objects, the rickety ceilings and the furniture in a mess that were moved by the explosion. Here, the radiation background is about two roentgen per hour.

In the third part of placements (about 170), scientists could not come at hitherto. No one knows what is happening there. Generally, this category includes quarters that are located under the reactor hall. In addition, this unexplored zone forms the main risk from the wrecked fourth block of Chernobyl in our days. 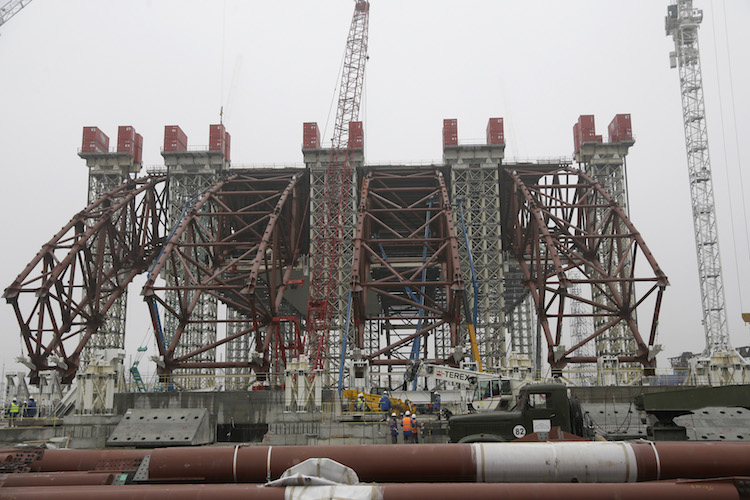 How much of radiation are in Chernobyl inside the sarcophagus? Inside the damaged reactor, there are about 180 tons of fuel. It turns into the fuel-containing masses; as a result, the levels of radiation reach thousands of X-rays in the Shelter even today.

Nuclear fuel and fuel-containing masses, inside Chernobyl sarcophagus, destroyed under the action of moisture and temperature extremes. It generates a major amount of radiological dust with an elevated content of long-lived isotopes such as plutonium (plutonium-239 half-life is 24 000 years).

This dust has accumulated, according to the most conservative estimates, at least 1.5 tons (according to other estimates – from 20 to 30 tons). The repository of fulfilled nuclear fuel on the territory of the nuclear station is more than 18 thousand fuel assemblies; equivalent is 9 tons of plutonium.

For example, to create one atomic bomb needs a few kilos. It is not expected the salvo release to the environment, but the experts cannot completely exclude the possibility of its dissemination by the wind because of current protective barriers. 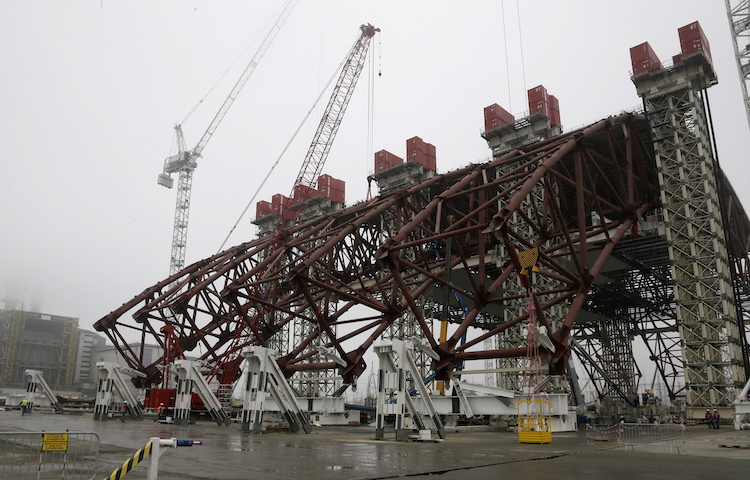 Does it exist: Chernobyl sarcophagus collapse?

The tightness of the Chernobyl sarcophagus structures has not been implemented at 100%. The total area of the slits in the roof and in the walls was 1000 m2 at the time of surrender. Over time, the structure began to collapse slowly. There was a range of actions:

Owing to these and other undertaken measures, the specialists managed to move 80% of the weight of the roof from the unreliable walls on the re-assembled and strengthened constructions. The repairpersons operated in high radiation fields, but no one received doses above 14 millisieverts per year (it is a standard norm).

There is the permeability barrier of the sarcophagus, it gets water (rain and melting snow) inside Chernobyl sarcophagus in large quantities. Annually, hundreds of cubic meters of liquid radwaste generated from the interaction of water with the remnants of nuclear fuel and fuel masses. To prevent the spread of radioactive elements it needs to remove and recycle them.

The scientists estimate that 95%, of the radioactive elements from the total amount which was at the time of the explosion, left inside the Chernobyl sarcophagus. Its overall activity is about 10 million curies. Total nuclear hazardous materials are about 200 tons.

Howbeit, the term of safe employment of the newly erected metal constructions of the object Shelter is 30 years; it will end in 2016. The committee of experts has decided to cover the entire Chernobyl nuclear power plant sarcophagus by hefty arch. It will defend for the next 100 years. 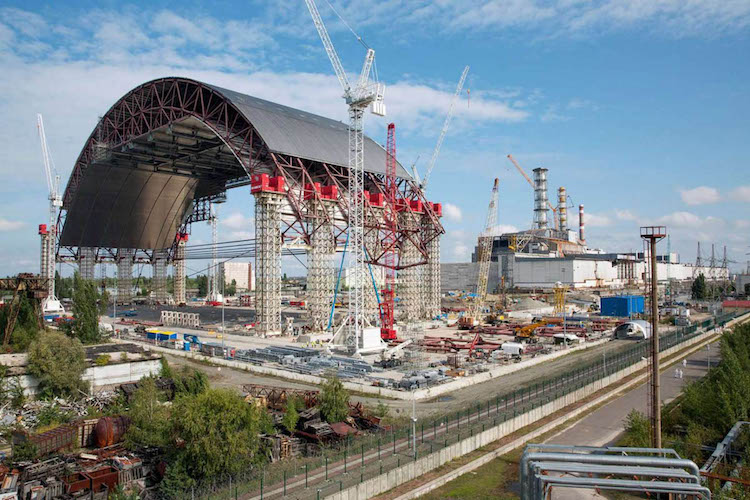 Will be Chernobyl sarcophagus replacement?

The masters build “Shelter-2” to sequester the whereabouts of the incident, to disassemble the old sarcophagus and to utilize the nuclear fuel. It will be “Chernobyl sarcophagus new sample”. Most often, it is called “arch” or “confinement”. Confinement is an international project. The design conducts the companies and the technicians from 28 countries.

In August 2007, after open international tender, SSE “Chernobyl NPP” and the joint venture NOVARKA (France) signed a contract for the design, construction and putting into operation foolproof confinement.

Forty-five countries finance the Chernobyl sarcophagus construction. According to data from November 2015, the total contribution of the participating countries was 1.3 billion dollars. In addition, half a billion gave out European Bank for Reconstruction and Development.

The Arch has such proportions:

The constructors have decided to collect the sarcophagus in 300 meters from the reactor to reduce the radiation dose for the builders. Then, they thrust over the arch above the fourth unit. This solution determined the shape of the future confinement because the movement of the arch is stable.

The workers installed a wall between the fourth unit and a building site. It reduces the radiation. Old edifices near the unit were dismantled, the upper layer of soil was removed and replaced by concrete slabs. All these measures help to protect workmen.

The amount of radwaste in the air increases with the height that is why the arch was collected in the way that people did not climb high. The designers combined the upper parts of contracture on the earth, in the first instance. Then, they lifted it and attached the “feet”. About sixty experts monitor radiation safety here. Furthermore, each employee has a personal dosimeter.

The man had never built anything comparable to the new Chernobyl sarcophagus. Only the design took more than 2 million working hours. Engineering work was carried out about 5 million hours and 17 million hours were spent on the assembling. The specialists performed a huge amount of functioning. At present, the arch has already been built. This project should be completed in 2017.