Nuclear Attack on Japan in 1945

It was summer 1945 the World War II was at its final stage. Germany capitulated, but the situation was quite different on the eastern front. Japan didn’t want to surrender under the conditions proposed by the Allies in the Potsdam Declaration, 26 July 1945. The war in the Pacific Ocean was expected to continue. About 200, 000

American soldiers were killed in the opposition with Japan, China also had its concerns about the possible invasion of Japan on its territory. The US government had made a decision to terminate the useless bloodshed and prepared the plan according to which several Japanese cities would be bombed.

Americans had invested much money in the development of atomic bombs. They involved into the development of those weapons the best specialists and scientists. Two creations of the US Manhattan Project were Little Boy, containing a rare isotope of uranium, and Fat Man, containing plutonium. Those bombs were decided by the President Truman to be dropped on the Japanese cities of a certain importance. The decision was fatal for the inhabitants of the cities, which were chosen as the target. Hiroshima became the first city in the history, which had experienced the atomic bombing, and Nagasaki was the second and the last city, where this kind of lethal weapons was used. The nuclear attack of Japanese cities Hiroshima and Nagasaki was carried out on August 6 and August 9 1945 respectively. Due to the significance of those events, the dates are called by many people as Hiroshima and Nagasaki days. 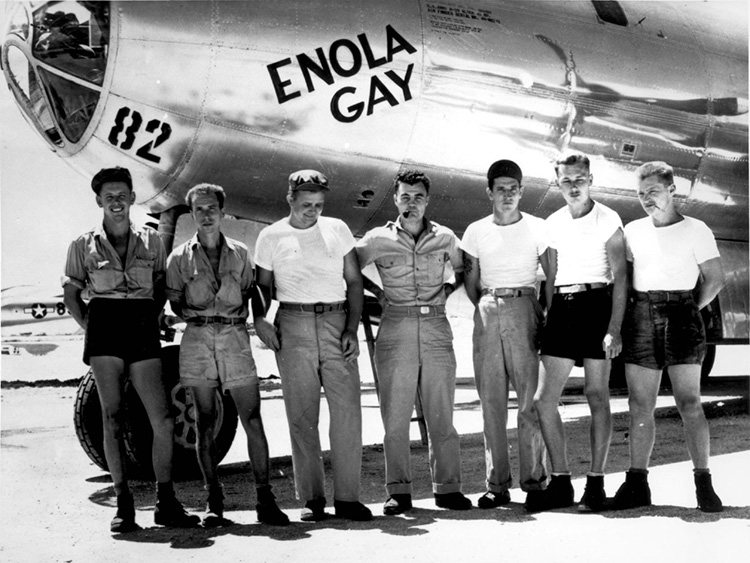 Hiroshima and Nagasaki during the war time

At the time the Americans dropped there the nuclear bomb, Hiroshima was the 7-th largest city in Japan. The population of Hiroshima was about 380,000 citizens, which during the wartime peak was reduced to about 245,000. Main residential and commercial districts of Hiroshima covered about four square miles in the center of the city. There were factories and suburbs around the edges of the city. The city was susceptible to fire damage, because it was mostly made of one and two storey timber houses. It was traditional for the Japanese to have their homes consisting of a wooden frame, wooden walls and a heavy tile roof. There were a few reinforced concrete buildings in the center and near the outskirts.

During the World War II there was located a number of military quarters and stockpiles of military supplies. The most important of military units was the headquarters of Second General Army, located in Hiroshima Castle, which was responsible for the defense of the southern Japan. About 40,000 military men were present in the Hiroshima city. Hiroshima was an important communications center and a key port. Its plants manufactured parts for planes and boats, handguns, bombs and rifles. Mitsubishi shipyard was also situated there. 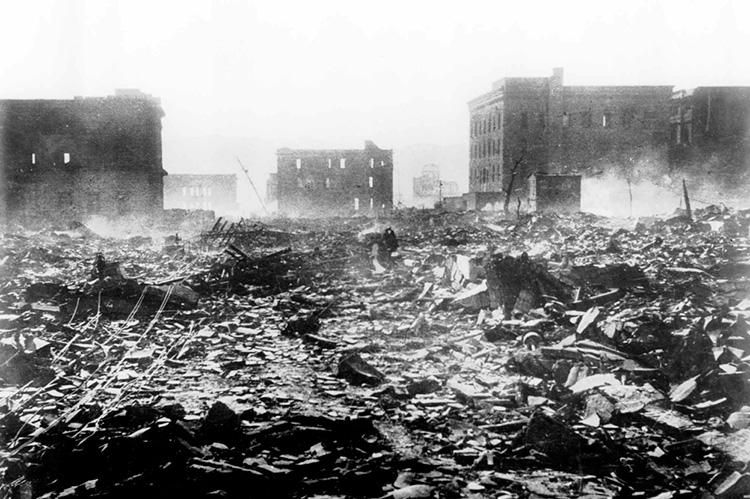 The city was spared from firebombing during the war. The peculiarity of the city lied in the fact that it was considered an intact city, it hadn’t been bombed like other great cities were. Thus, the consequences of the atomic bomb blast could be measured there more precisely. At midnight before the actual bombing of Hiroshima the citizens received a message through the radio which informed them that about two hundred B-29s were approaching southern Honshu and advised the population of Hiroshima to evacuate. Several thousand people left their homes and went to safe places, like the East Parade Ground.

The prefectural government was convinced that the city would be attacked soon, so everyone lived in the anticipation of bombing. The government, nevertheless, ordered to do some preparations. The fire lanes all over the city, which had been built before, were cleared. The lanes in conjunction with the rivers would help to localize any fires started by a raid.

Due to the harbor trading was well developed in the Nagasaki. Many merchants from abroad came there with their goods. The exchange in the port city was not only material, but cultural too. The Christianity was brought there by Europeans and the European belief strengthened its position in Nagasaki like nowhere in Japan. The city became the one with a well-developed heavy industry. It was majoring in shipbuilding. 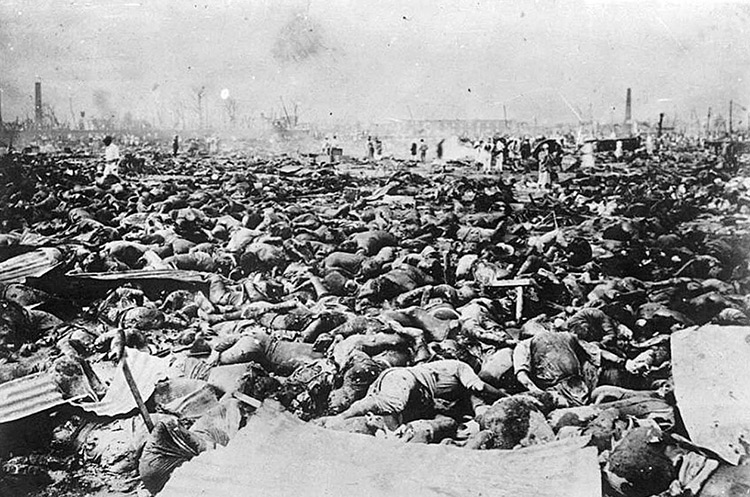 The atomic bomb of the US armed air forces was dropped in Hiroshima at 08:15 on August, 6 1945. The bomb was called “A Little Boy” and was 3 m (9 ft. 9 in.) long and weighed 3,600 kg (8,000 lb.). It contained uranium 235, had the power of 12.5 kilotons of TNT. The bomb was delivered to the place of destination by the US B29 bomber, nicknamed Enola Gay. The bomber flew to Hiroshima accompanied by two other bombers. They all were spotted by the Japanese radars, although no measures were taken for their elimination, because due to their small number they were considered as a minor raid. The nuclear bomb exploded 580 m above the ground, creating a tremendous blast. The aiming point of the US soldiers was missed and the bomb detonated over Shima Surgical Clinic instead of the Aioi Bridge.

According to the stories of the witnesses, an explosion created a bright flash of blinding light and the explosion wave spread around really fast. The blast and its wave killed 90 % of people who were within the distance of 800 metres. The temperature below the fireball of the blasted bomb reached 4000 degrees, that’s why everything below and near it was turned into ashes. On Hiroshima day about 80,000 people were carbonized, vaporized or otherwise killed as a result of the blast and fire. Many small fires all over the city merged into one big firestorm, which burnt everything on its way. The wooden houses were burnt down like matches. The firebreaks constructed beforehand were useless.

Hiroshima city remained uninhabited for the following seven years. The scientists made their investigations and measured that the level of radiation in the city was many times higher than the normal one. The scientists learnt that the flash of the bomb left prints of the shadows that had been cast by its light on certain types of building materials. For instance, there was a permanent shadow thrown on the roof of the Chamber of Commerce Building by the structure’s rectangular tower. The researches had also identified some human silhouettes, which had been burnt out of people. One silhouette, for example, depicted a painter with a brush in his hand; the other silhouette remained of a man who raised his hand to whip a horse. 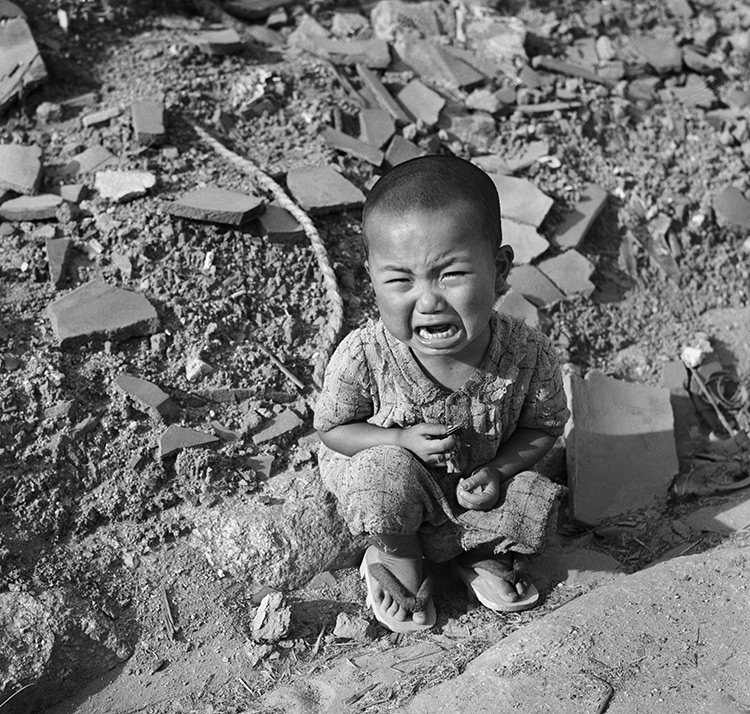 At 11:02 on 9 August 1945 the bomb, which used plutonium 239, was dropped on the northern part of Nagasaki by parachute. It was 3.5 m. (11 ft. 4 in.) long, had the power of 22 kilotons of TNT, and weighed 4,050 kg. (9,000 lb.). The bomb nicknamed “Fat Man” was first planned to be dropped on another city – Kokura. The city of Kokura wasn’t bombed, because of unfavorable weather conditions – there were heavy clouds over the city. The second target was Nagasaki. The city was also cover by clouds, but the crew managed to find a gap in the clouds and drop the bomb. It blasted off 500 m over the ground.

Nagasaki experienced a great industrial damage; 68–80% of the non-dock industrial production had been destroyed. The atomic bomb was dropped on the industrial area of the city; the residential area was shielded by the mountains. The area of complete devastation there made 6.7 sq. km. (2.6 sq. mi.) unlike in Hiroshima, where it was 13 sq. km. (5 sq. mi.). About 73,884 people were killed and 74,909 injured. 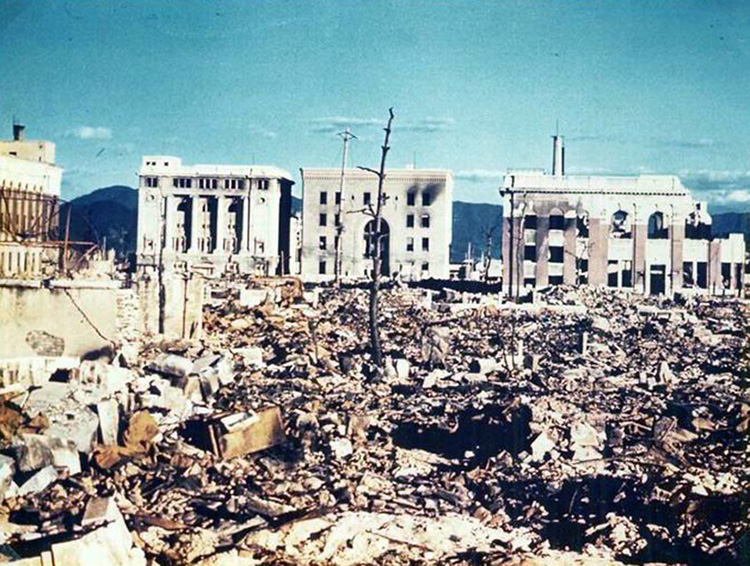 After the defeat of Japan in the World War II, it was occupied by Americans and the Allies. They introduced reforms all over the state with changes in military, political, economic, and social spheres. After the war was over, many wartime companies were converted to peaceful economic development. New Japanese company emerged and expanded quickly. The industry had to be rebuilt from the base which led to the invention of new technology and introduction of new managing styles. 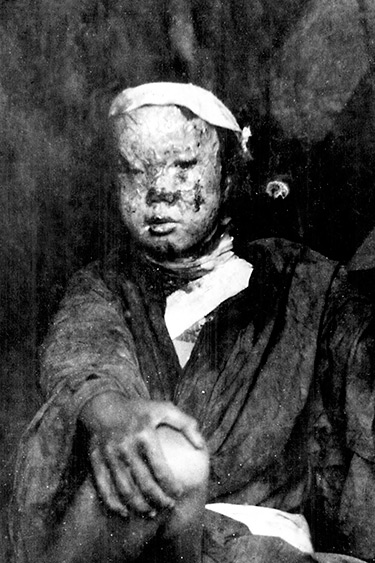 The pace of reconstruction of the cities Hiroshima and Nagasaki was slow, as they required huge sums of money to rebuild, and the city’s reconstruction budget was small. First, main roads were cleaned of rubble and debris. Then the infrastructure of the cities was being restored: water and sewage lines, electrical lines, food distribution. People lived many years in shelters, making individual efforts to build their homes. The people faced the lack of food, which was provided there from the nearby areas. The government also supported the victims of bombing by special medical programs.

The war industries of Nagasaki were replaced with foreign trading, shipbuilding and fishing. Many Catholic churches were also built. There was raised the Atomic Bomb Museum.

The Japanese revival shows a perfect example of the nation’s unity and persistence. Soon after the war the Japanese managed to regain its leading positions in industrial achievements among other countries of the world. The Japanese don’t forget about their tragic past and memorialize their history in museums and memorial parks.